A Nov. 9 afternoon session at the National Association for Pupil Transportation (NAPT) Summit packed in a large crowd eager to learn more about how to respond to a violent intruder — and to witness a live-action simulation aboard a school bus.

The timely event began indoors with a presentation by Gary Moore, a retired Missouri Highway Patrol captain who now serves as safety coordinator for the Missouri Center for Education Safety.

Moore’s presentation centered on the January 2013 slaying of Alabama school bus driver Charles Poland, who was shot by an intruder who then took a boy from the bus and held him hostage in an underground bunker for nearly a week.

Moore began by playing a 911 call recording in which a 16-year-old student on the bus calmly described to a dispatcher what was happening as the intruder, Jimmy Lee Dykes, confronted Poland.

In a surprise to NAPT attendees, that student, Tre’ Watts, was in the room with his father. Moore presented the NAPT Heroism Award to Watts, while the audience gave him a standing ovation.

Moore described how Dykes had tried to “groom” Poland in the days before the encounter by clearing out a turnaround area for Poland’s bus and offering to bring him broccoli and carrots. Dykes apparently expected these gestures to help him, when the fateful day came, to persuade Poland to hand over two boys as hostages, but Poland refused, even to the point of being fatally shot.

According to Moore, Poland could have had a chance to survive Dykes’ scheme if he had been trained on how to handle this type of situation. Moore said that the concept of JDLR — meaning that something “just doesn’t look right” — is particularly helpful in identifying potential threats.

Moore gave an example of a “JDLR success story”: A Wentzville (Mo.) R-IV School District bus driver saw a truck parked next to one of her stops, and the truck matched the description of a vehicle involved in a child abduction. Instead of stopping at the regular stop, the bus driver dropped off those students directly in front of their houses and waited until they got inside. She called in the truck’s license number, and the owner of the truck turned out to be a drug dealer, Moore said.

Moore also detailed practical steps that school bus drivers can take to prevent or respond to violent encounters on the bus. That starts with never letting an unauthorized person on the bus; if parents or others insist on communicating with the driver at a stop, they should be directed to go around to the driver’s window, Moore said.

If an intruder makes it onto the bus, Moore gave this suggestion: Advise the violator that you will discuss the issue outside the bus, away from the students. When the violator steps off, shut the door and report the incident.

Moore listed ways to try to defuse a hostile person, such as projecting a “listening face,” showing concern for the person, speaking in a calm voice, paraphrasing what the person says, and using a transition word, like “however.” For example: “I hear what you are saying and understand; however, I need to get these kids to school.”

In some cases, the school bus driver may need to respond physically. Moore noted that objects on the bus, such as a fire extinguisher or de-icer, could be used to fend off a shooter, first by spraying and then by hitting him with it.

Also, the bus itself could be used as a defensive tool, by accelerating, braking or swerving. This could throw a gunman off of his feet, giving the driver a few seconds to “neutralize” him. Three quick ways to do that, Moore said, are gouging the eyes, striking the throat and striking the groin. With any of those actions, the key is to deliver them decisively.

“If you have to use physical force, be committed to your actions,” Moore said.

The second portion of the event unfolded outside, in a loading bay of the convention center. Attendees who wanted to experience an active shooter scenario firsthand boarded a school bus and put on ear plugs and protective headgear.

With someone portraying a gunman on board, a SWAT team stormed the bus. Some officers were positioned on top of a SWAT vehicle, some used ladders to ascend to the height of the bus windows and others ran on board, commanding attendees to put their hands on their faces (so they could see everyone’s hands). In a matter of seconds, they had taken out the gunman. 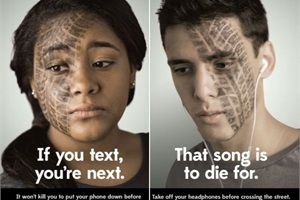 State directors of pupil transportation who convened in Kansas City heard presentations on a variety of issues, many related to student safety.

One presentation shared details on the Montgomery County (Md.) Department of Transportation’s YOLO Walk Safe program. YOLO stands for “you only live once.” The program was developed by students for students to help combat “distracted walking” caused by activities such as texting, playing hand-held games, listening to music or talking on the phone.

“We began working with one high school that was located in one of our high-incidence areas in 2010,” Nadji Kirby, Safe Routes to School coordinator for the Montgomery County Department of Transportation, said in a later interview. “We worked with the school administration to establish a pedestrian safety working group that included students, and we worked with those students to develop pedestrian safety awareness activities. Due to this success, we knew that some of the same strategies we used at this school could be used at other high schools.”

Sadly, it was in the midst of efforts to broaden the program that a Montgomery County high school student, Christina Morris Ward, was fatally struck while walking to school.

“At that point, our County Council felt this was a priority, so they wanted us to develop a specific high school pedestrian safety program,” Kirby said. “We started with the ‘Walk Your Way’ project in late October 2013.”

That project gave grants of up to $2,000 to high school groups to create and launch their own pedestrian safety campaign. This generated the second part of the program, the YOLO toolkit.

“The toolkit was created to basically serve as an inspiration, motivator and idea generator for even more schools and student groups to get involved in developing their own pedestrian safety programs,” Kirby said.

The YOLO toolkit, which is available via schoolbusfleet.com/yolo, contains:

• A guidebook on developing and implementing a school pedestrian safety education program
• Ideas for events/campaigns that could be conducted by a partnership of students, parents and PTAs
• A USB drive with digital resources, including web banners, poster files and a video titled “Moment of Silence”
• Campaign posters
• Static clings for restroom mirrors
• Sample morning announcements
• Pledge banners
• A customizable letter/e-mail and a tip sheet for parents in English and Spanish
• A social media plan, including graphics and pre-written tweets and posts
• Talking points for meetings

“Currently, only public schools are included in the receipt of a toolkit,” Kirby said. “However, the great thing about our website is that anyone can access and utilize the posters, tweets, announcements, guidebook, etc. as they see fit for their school. I am hopeful that some private schools will utilize the resources.”

Kirby cited statistics that show that one in five high school students cross the street while engaging in distracted behavior. “In Montgomery County, for pedestrians at fault between 10 and 29 years of age, the age range found most at fault was 15 to 19, so this data supported our outreach efforts aimed at this age group,” she said.

In addition to making the YOLO toolkits available, the Montgomery County Department of Transportation conducts pedestrian safety assemblies that include the county police as well as Gwen Ward, the mother of Christina Morris Ward.

“We will work one-on-one with high schools to help them plan and implement various pieces of the overall program,” Kirby said. “That may take the form of an assembly or a presentation for specific groups of high school students. Each school varies. We just hope that each school will do something to help make their staff and students really understand the dangers of the road and what they can do to help keep themselves safe.”

“I was extremely impressed with the YOLO Walk Safe campaign,” Willi said. “It is a well-crafted, simple message that I was able to immediately identify. I think it is a message that should be taught across the country, especially as texting and smartphones continue to grow in accessibility and popularity.”

Best-selling author, comedian and motivational speaker Steve Gilliland got audience members laughing while sharing lessons on leadership, urging them to focus on the joy in life’s journey during his keynote presentation on Sunday at the National Association for Pupil Transportation (NAPT) Summit.

Gilliland shared humorous anecdotes from his time as a sports announcer on national television, his work at a greeting card company, and his career in corporate America as an executive, where he met the woman who, he said, taught him the most about leadership and inspired him to write three books about the topic.

When Gilliland started working with his executive secretary, Margaret, she told him she had been at the company for 37 years and had “worked for two directors and one executive vice president, but never had the chance to work for a leader,” he recalled.

He added that Margaret taught him that leadership is based on the ability to motivate people when things are tough, but most importantly, to be driven by purpose and not processes and procedures.

“Margaret said, ‘It’s not where you start or finish in life, it’s the trip,’ and, ‘Cure your destination disease,’” Gilliland told the audience. “That’s why it’s important to check your passion for what you do every day.”

Gilliland pointed out how many people are just focusing on what comes next, telling themselves they’ll do what makes them happy “when we get our kids through high school,” “when we finally get this paid for,” etc. His advice? “Slow down. Enjoy the ride.”

Gilliland’s book “Making a Difference” focuses on how to positively influence people every day, regardless of your position. Margaret made a difference to many people, he said, even if she never ran a company.
[PAGEBREAK] NAPT honors award winners
By Nicole Schlosser

The National Association for Pupil  Transportation (NAPT) presented awards throughout the course of its Summit in Kansas City.

Among the award winners at the conference was SCHOOL BUS FLEET Publisher Emeritus Frank Di Giacomo, who was recognized with the NAPT Distinguished Service award.

Meanwhile, Bill Loshbough of Execuwest Consultants in Albuquerque, New Mexico, who serves as NAPT’s trade show manager, was inducted into the NAPT Hall of Fame.

Additionally, the America’s Best competition winners were recognized with awards presented by Marshall Casey, the chairman of the America’s Best committee, during the Nov. 9 evening event sponsored by IC Bus. The competition was held that morning, with 15 inspectors, 18 technicians and eight specialized transportation personnel competing to take the top spot in their categories.

The winners in the inspector category were:

The technician category winners were:

Other awards presented at the NAPT Summit included:

“We applaud all of this year’s participants for their hard work and commitment to the industry, and look forward to seeing them again in 2015,” said Megan Geroux, marketing and communications specialist for NAPT.

Steven Bayless, senior director of telecommunications and telematics at the Intelligent Transportation Society of America, opened the session with information on connected vehicle technology.

Michael Martin, executive director of NAPT, discussed policy-making and related education and training that should be considered as the technology moves forward and impacts student transportation.

Ken Hedgecock, vice president of sales, marketing and service at Thomas Built Buses, addressed advanced telematics and explained the manufacturer’s philosophy on taking a more conservative approach in adopting iterations of the technology.