Close
The Fairfax County (Va.) Public Schools district is considerable in size. According to its own numbers, it is the tenth-largest school district in the country, ranks second in the nation in the number of students transported by school bus, and, at 1,625 school buses (including 1,181 route buses), it boasts a fleet that took the No. 8 spot on School Bus Fleet’s Top 100 District Fleets of 2019 list.

Everything becomes more complex when a school system is that large, and the district has developed some creative solutions to issues such as getting support from schools for bus discipline problems, assisting bus drivers in the field, and maintaining a large fleet.

With 143,000 eligible riders, the number of school bus discipline incidents occurring on buses can reach up to 1,200 a year, says Francine Furby, the district’s director of transportation. (The district regularly transports 141,800 students daily.) To ensure that schools support drivers when behavior issues arise, the transportation department developed a discipline tracking system.

The system fulfills a variety of functions. It shows the number of disciplinary bus incidents for a school, on a bus run, by a student, or with a driver — data that can be used to address repeat issues. Most importantly, the program gives drivers immediate support and ensures that administrators follow up on discipline problems the drivers have reported.

“The tool fosters a partnership with the schools and strengthens their support of our drivers when discipline incidents occur on the buses,” Furby says.

The tracking system is designed to be easy to use. The driver fills out a four-copy incident report at the end of a run. Two copies go to the school, one to the driver’s supervisor, and one stays with the driver. The supervisor immediately counsels the driver on whether they should handle the situation or if it should be reported to the school.

At week’s end, the transportation department sends a copy of the report, which states the number of pending incidents and a request for an update on them, to the school district’s area offices and each school’s administrator.

In the year the tracking system has been in use, follow-up on bus disciplinary incidents throughout the school district has improved, Furby says.

When a school district covers 406 square miles in a traffic-laden area, as Fairfax County does, all sorts of transportation problems can occur, ranging from bus breakdowns to accidents to sick students.

To get buses back on the road and students to their destinations on time, the district employs 84 bus driver supervisors. The supervisors perform myriad duties, but their most important job is supporting their drivers.

Three or four supervisors are assigned to each school bus driver team. A team is composed of 75 general-education and special-needs bus drivers and attendants who transport students to a high school, one to two middle schools, and three to five elementary schools.

“It really helps to have the bus driver supervisors scattered about on the roadways,” Furby says. “We can get resources to them as quickly as possible. It would take some time for someone from the office to get to a driver." 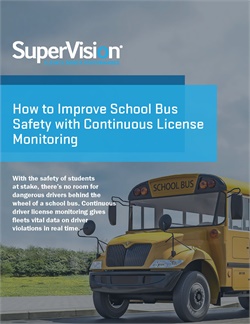 Upon arriving at the scene, the supervisors fill out incident reports, call dispatch, and ensure that parents and the school are notified. If there’s an accident, the supervisors check that all the students are OK, take pictures, and call the police. If the driver’s bus is disabled, the supervisors help transfer students from the broken bus to their bus and take them home or to their destination.

The supervisors also meet their drivers at the schools to review incident reports and deliver paperwork along with any necessary equipment, such as seat belt guards or safety vest inserts and/or replacements. They may be called on by school staff to resolve school bus questions or concerns.

The supervisors’ duties further include filling in if the transportation department is short-handed. They may serve as attendants on special-needs buses or drive some of the routes.

When not on the road, the supervisors perform essential office duties, including reviewing driver time sheets, pulling videotapes, checking route changes, monitoring the counts on buses to ensure routes aren’t overloaded, and contacting parents who have questions about bus stops or arrival times.

While many transportation departments maintain their buses, Fairfax County Public Schools has a different arrangement. Its fleet of 1,625 regular buses, special-needs buses, and vans is serviced by the county.

“Fairfax County and the school district work together so we don’t duplicate services,” Furby says. “It’s productive, efficient, and cost-effective.”

All the technicians who service the district’s vehicles are employed by the county. One group of technicians perform the fleet’s scheduled maintenance at the county’s garages. Another group, the floating technicians, go where they are needed. For example, they help start buses at 5:30 a.m. on cold mornings, work until 10 p.m. to cover evening field trips and late-night problems, and service buses that break down.

Joseph Wellborn, the district’s fleet manager, serves as a liaison between its transportation department and the county. He works with the technicians’ supervisors to solve recurring mechanical problems and determine which new products or trends would better serve the school district or be more cost-effective. He also consults with the technicians’ supervisors when the school district purchases new and replacement school buses.